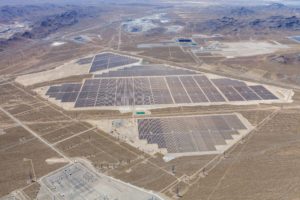 Our growth in IT and advanced manufacturing is a big driver in demand for clean energy. Tesla clearly put Nevada on the map in terms of dramatically changing our reputation after the recession, but the win that really got things started was bringing Apple to Reno in 2012, which, along with targeted incentives, started a data center boom. These facilities are very energy intensive and the tech companies want them to be powered by clean energy, which increases demand for renewables.

Our data center tax abatements — which were established to make us more competitive with other states — have attracted Apple, Switch, Rackspace, and ViaWest to invest billions in Nevada.

Switch uses 100 percent renewable energy for all of its operations and recently announced the Gigawatt 1 project, to be built in Northern and Southern Nevada, which will be the largest solar project in the United States.

The project will produce among the lowest priced solar power in the world and generate enough clean energy to power nearly one million homes.

Another big win for GOED early on was attracting Solar City’s regional headquarters to Las Vegas in 2013. Renewable energy projects have since taken off across the state.

Ormat in Reno currently delivers more than 160 megawatts of geothermal power either to NV Energy or exports it to California.

K2 Energy in Henderson is an American company and a leading researcher, developer and manufacturer of Lithium Ion batteries that are used in many advanced medical, transportation, and military applications around the world.

Sempra Energy, one of the largest photovoltaic solar plants in America, is located in Boulder City and consists of nearly one million solar panels spread over 450 acres.